“I AM THERAPIST” Poem by Levi Johnson

I am the second edge of a neurotic wedgefor which they feel so numb.I am the squirm of all their memory wormssprinting to outrun.I am the squeaky sigh of unhinging mindsturned over and outdone. I am a magic wand of a mystery beyondfree spirit that marquees.I am the time traveller finding cracks in hellfor glorious […]

“Only in Legend” Short Fiction by Jennifer Patino

Brandon and Jamie shone their lights up into the treetops. The night air was sweltering and David could swear he heard a sound coming from up there. His breathing was bordering on hyperventilation. “Chicken, as usual,” Jamie sighed, letting her backpack fall to the ground. A dust cloud rose up around it. Brandon shuddered. He […]

John A. DeLaughter M.Div., M.S., is a Data Security Analyst and Lovecraft essayist, horror, and fantasy author. He lives in rural Pennsylvania with his wife Heidi. His work has appeared in The Lovecraft eZine, Samsara: The Magazine of Suffering, Tigershark eZine, Turn To Ash, and The Eldritch Literary Review Journal. John is presently editing his original epic fantasy work, Dark Union […]

In my haste to put out the announcements for the works appearing on Feb. 26, I failed to double check myself and mistakenly gave Jennifer Patino’s name as either “Jean Patino” or “Jenn Patino”. I have known people with all three of those first names and got them confused somehow. In any case, be sure […]

In my haste to put out the announcements for the works appearing on Feb. 26, I failed to double check myself and mistakenly gave Jennifer Patino’s name as either “Jean Patino” or “Jenn Patino”. I have known people with all three of those first names and got them confused somehow. In any case, be sure […]

Biography I was born in Southern Georgia to a working-class poor family. I started working when I was 12, mowing grass. I was a custodian and then worked in hotels through high school and college. I worked for the Air Force as a civilian, worked as a counselor, and landed in higher education where I […]

Lisa was a girl full of vitality, enthusiastic and restless. Innocently, she went to see a fortune teller, who announced that she would inevitably die soon. She returned home with a shattered soul. Regretful, Lisa berated herself for her damn curiosity. Heartbroken, she cried endlessly throughout the night. In the morning, they found her dry […]

Raymond had no idea of  how he got into such a dark, wet and filthy place. It couldn’t be the dungeon as its only water seeped from the cracks of the castle’s centenary walls. For sure, it was that red head’s fault. He was dead thirsty when he entered the inn determined to satisfy […]

With our recent publication of several works of Bogdan Dragos along with his interview with The Chamber, the amount of The Chamber’s website visitors from Romania has rocketed. Outside of Dracula, very few Americans would be able to name another literary work or a movie set in Romania. There are some horror movies set in […]

Biography: I was born in 1992 in Romania and had a happy childhood until I went to school. I never had an answer to the question “What would you like to become when you grow up?” and still don’t. But I was lucky enough, after college, to land a job as a dispatcher at a […]

When I left home at 5:00 a.m., I didn’t see a vehicle on the road as I meandered the neighborhood and the main road arteries to get to the bypass. A bypass, by definition, shouldn’t have traffic lights, especially ones that aren’t synchronized. To have them interrupts the flow of traffic. The glaring red light […]

“The Intruder” Fiction by Joe Pawlowski

“The Intruder” is from The Vermilion Book of the Macabre, copyright © 2020 by Joe Pawlowski. There are men who do not rest easily in tranquil homes. Who shoulder no load at any worksite nor bow to any god. They live in a world of their own making by their own rules. Brooding men with […]

Biography I was born the winter of 2000 in Philadelphia to a mother, father, and sister. We enjoyed, for the most part, that middle-class, Irish Catholic, suburban lifestyle. Two dogs and a cat passed through our house. I gave up all the many sports I played in Catholic school when I transferred in 4th grade […]

“Thanks to you, Benny, I am now in penance.” Benny stood still, saying nothing. “I’ve already explained everything to Mom, but she doesn’t believe me. She keeps telling me that I was the one who damaged the keyboard. She told me that you couldn’t be the one who spilled the milk on the computer.” “Your […]

Biography: I was raised in godless, liberal Madison, Wisconsin, where I still live and work in order to support a longstanding travel habit. I always called myself a writer, but it wasn’t until about ten years ago that I really made an effort to learn the craft. That was when I was diagnosed with MS, […]

I did not know her name, nor if she went by she. It was them, then, who made me this way because I had stolen something. So much for the memory of ghosts. The visual proof of my beautiful body had faded fully. Once on a beach south of here, in San Diego, a dog […]

“It’s been a long time since you came to visit me,” my mother said, in her best victim voice. I didn’t want to explain her that my relationship with Alice wasn’t going well and the same thing happened to me at work. I looked helplessly at the bouquet of flowers in my hand. “You never […]

I never liked flies. Perhaps because I associated them with death and illness, with corpses and worms, with the filthiest of the zoological scale. So, when my Buddhist teacher told me that there was this possibility of reincarnating into a lower being, I panicked. I changed my lifestyle and I set out to climb the […]

“Sonata No. 6 (for Julian Scriabin)” Poem by Sun Hesper Jansen

I shiver when the work is finished, and ask if she is pleased – knowing she cannot answer in any human tongue. I do not breathe until she retreats to the silent murk, sated for now.   Such were your words, Papa – murky, nightmarish, and unclean – for the one piece that will ever […]

Well, when you’re desperate you’re… “Me,” he said. He was alone in the room and lonely enough to have bought one of those Ouija boards from some old woman who called herself a medium. It was time to try it out. All he hoped for was a sexy ghost that would haunt him, maybe hurt […]

The Chamber Magazine is embarking on a new feature of conducting written interviews with authors whose work has been published on this website. Today’s interview is with Clay Waters, whose story “Frozen Dinners” was published on January 8. Clay Waters has had short stories published in The Santa Barbara Review, The J.J. Outre Review, Morpheus Tales, […]

The Hhest, my ancestors, called this soft twilight Ssayat Tlichat – the Awakening Hour, holy to harvesters and hunters and travelers and priests. Holy to the hundred thousand ghosts of the deep desert’s heart, whose numbers I will soon join if no one answers the bell I rang at the shrine. I did ring it, […]

I know how quickly a lightning bolt can strike, can defuse you. Like the moment in the middle of the highest rope bridge, fingers clutching the netting, swaying blood in tense veins, earthquake rumbling beneath you as fearless children rush past. Wanting to scream at them, [can’t they see you’re dying?] but breath must be […]

There was a dog outside and it kept barking for some reason. Ah yes, it was chained and the chain was terribly short and the poor animal was hungry. Mother wouldn’t bother feeding it. No, mother wanted it to die because it had been father’s dog, inherited along with the house after father died. Mother […]

It was the end of October, by Grant’s reckoning, and he was staring at the shiny chrome door of his Pod. He’d come down to the basement to get a turkey dinner from the freezer. He had yet to tire of the taste, which was good, since that was all he had for food after […]

Something wasn’t quite right in this small, barren room. The man sitting across the square table, dressed in a white coat, seemed a little to calm for someone in reaching distance. ‘I could just reach for that bald head and snap the neck real nice,’ he thought as he watched the man. ‘What does he […]

The sky was whited out that morning, like a great ashen blanket thrown out over to the horizon. You couldn’t make out one cloud from the next. The day was pale, and a thin vaporous mist had settled over the wet grass. The trees and bushes were soaked through with rain from the night before, […]

“A spider web full of butterflies. Shaking in the wind” Short Story by Bogdan Dragos

She stretched on the bed and reached with her long leg and placed her foot on his desk, before him, on the notebook he was writing in. “Wow,” she said. “Your place is so small, like a box of matches. And so empty. So lonely. Why don’t you ever have anyone over? I never see […]

“Life is the Life” Poetry by Richard H. Fay

Roused from decades of sepulchral slumberBy savage cannonades and rifle fire,Departing the dark comfort of my tomb,I roam a mad world ripped apart by war. Venturing forth like a smoky blue veilWafting across this cratered countryside,Searching for the base essence of being,I am drawn to fields of lingering death. Drifting amidst battle-broken bodies,Ignoring agonizing cries […]

“From Within the Earth” Short Story by Richard H. Fay

Now that it has come, our doom hasn’t arrived from outer space, but inner space. No death star pulsing gamma rays or behemoth killer asteroid spells our demise; the Earth itself will see to that. Something stirs within the heart of this abused sphere, making all man-made disasters look like child’s play. Gaea is finally […]

Three in the morning and I had to get up to piss. My body was aching. My head was throbbing. I had been drinking since noon and passed out about one in the morning. I nearly tripped on an empty bourbon bottle on the floor, barely managing to keep my balance by leaning on the […]

“Spirit of the Chamber” Poetry by FRED

Phantom spirit, ‘neath shroud of green tangled ivy, wrapped in strangle-hold around your form unseen. What lurks hidden until the light of fading day is by the earth consumed to welcome spectres of the night? Can your dark visage be so vile that you should cower like some clandestine soul condemned to haunt this vault […]

“H.R. Giger: His Dreams, Our Nightmares” Article by John A. DeLaughter

“You know, it takes profound art and profound insight into Nature to turn out stuff like Pickman’s…only a real artist knows the actual anatomy of the terrible or the physiology of fear- the exact sort of lines and proportions that connect up with…hereditary memories of fright, and the proper colour contrasts and lighting effects to […] 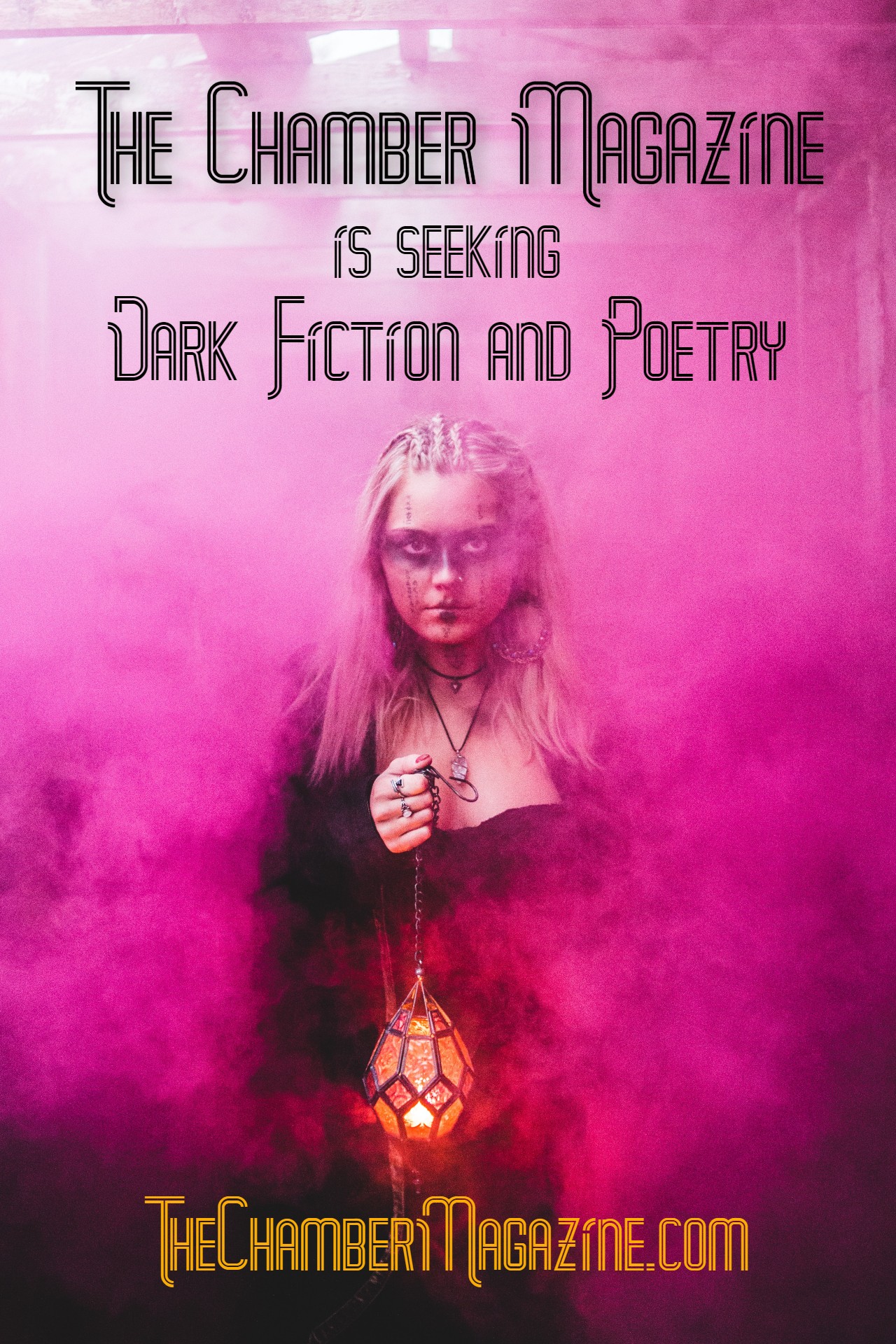 Listen to dark music as you read.

Set the mood with the ambience of Dracula’s Lair.

The Chamber is now on these social media:

Now Available in Paperback at Most Book Retailers 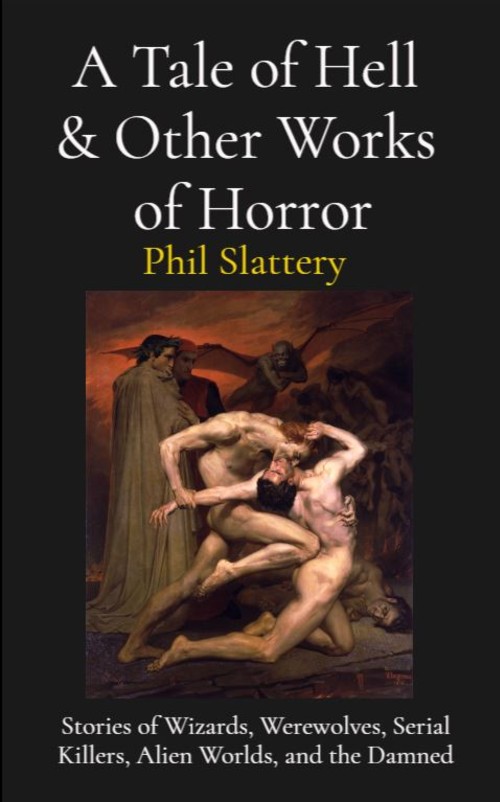 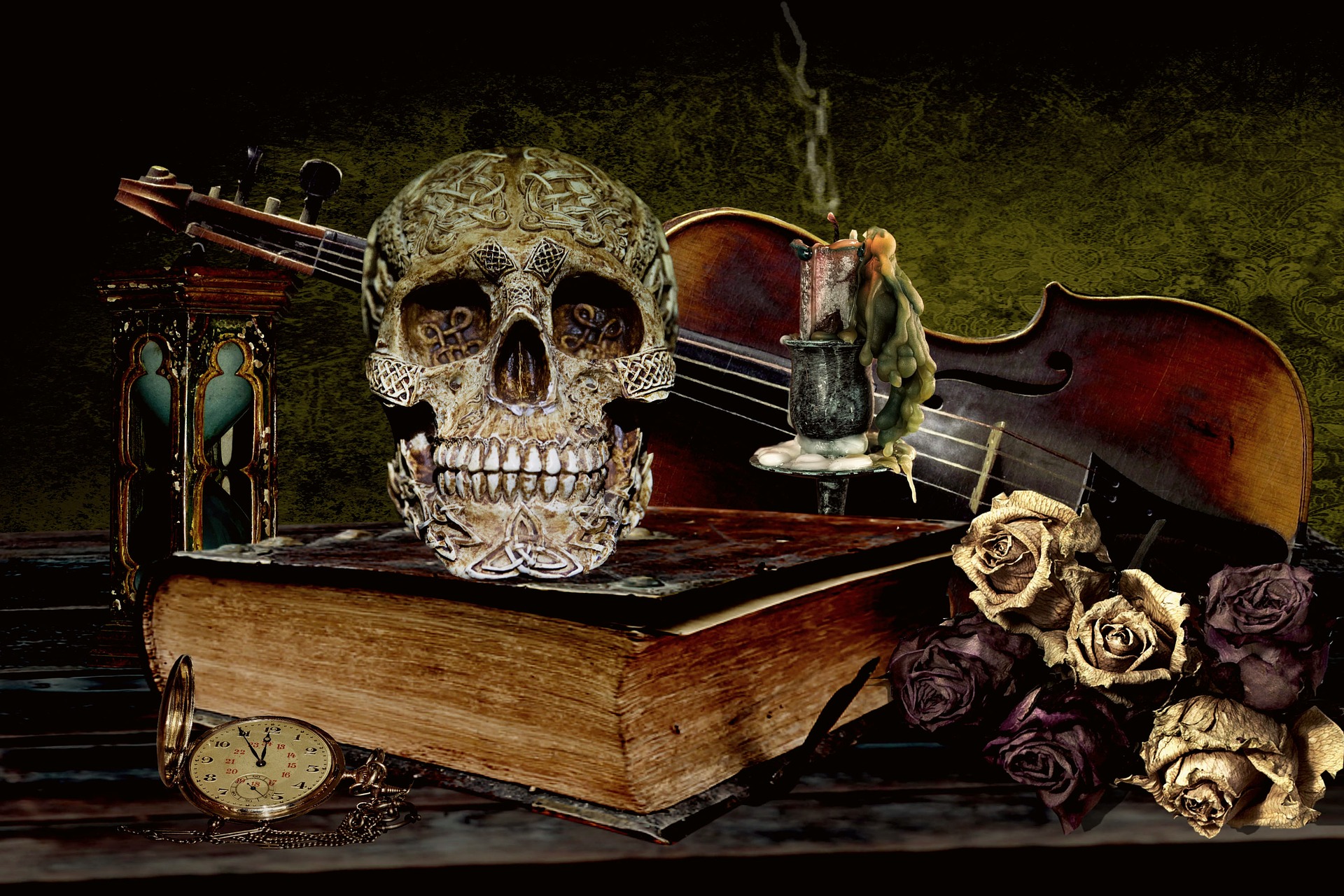 Books by Phil Slattery (ask for at most bookstores).

Creepy Cabin in the Woods

The Chamber Magazine is Seeking Dark Fiction and Poetry 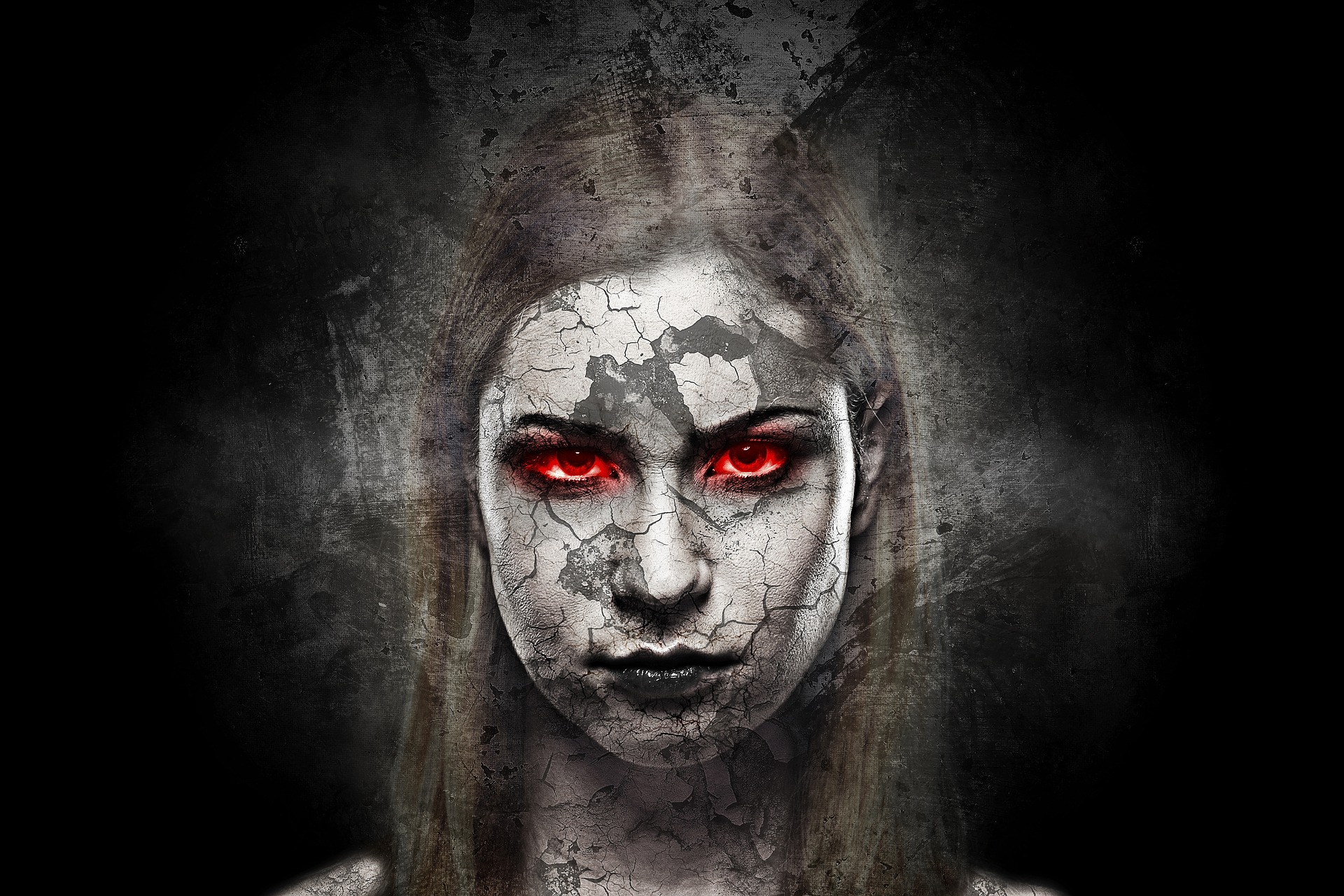