I had driven through the bleached downtown area battered by wind and dirt. Across the railroad track – once six tracks wide, now two, and the highway – once two-lanes, now four, I entered a neighborhood unseen in over fifty years. Not much had changed except the basement house on the corner was gone.

A few surviving elms overhung ancient sidewalks as brittle and cracked as when I, as a five-year old child played in the front yard during a time of unlocked doors. A time when screen windows stayed open, a time with no metal detectors to pass through before entering public buildings.

The slightest of winds caused the leaves of the few remaining elms to flatten casting shadows across the side and onto the house where my dog, Ikey, had frolicked.

I stopped the car, rested my chin on the steering wheel, and, within a moment I was at this very spot as a young boy squinting through the screen door of my parents’ rented house. A small child’s attempt to shut out his mother’s headaches and regrets and his father’s scatter shot venom, that constant burn of anger he carried his entire life.

Is it-? My imagination? Is that him?

I called out. “Mr. Childress. Are you-? Waiting for me? Is it time?” He was an old man about the age I am now.

The back door led to my father spewing anger toward whatever was in his line of sight while slopping aluminum paint onto an old garbage can. The front door led to a walk with Mr. Childress.

I heard my mother’s voice. “Your father wants you in the backyard.” My father wanted me to paint the inside of the trash can, but mostly he wanted to clamp his teeth, rip his glasses off, press his forehead against mine and yell. Even at the age of five, I had tread that path a few times too many.

“Okay,” I said, and walked out the front door straight to Mr. Childress so he could take me on another trip.

I looked straight at his face as he bent to shake my hand.

“What happened to your nose?” I asked.

“Something grew there and needs to be taken off.”

“Not yet.” He smiled and asked about school, my dog, and what I planned to do that day. Then he took me on trips from the Populist Party of Jerry Simpson and Mary Lease through the heady days of the Roaring 20’s, and into Prohibition, introduced me to Al Capone, and took me on a car ride with Bonnie and Clyde.

We talked the next day too, but Mr. Childress had to go home early. “Got a doctor’s appointment tomorrow so I need to rest up.”

I did not see him for a week. Then one afternoon he was waiting on the sidewalk wearing a wide brimmed straw hat. The bandage across his truncated nose was dotted with specks of black and dark red.

He grinned and said, “They kept it at the doctor’s office.”

He smiled and patted my left shoulder.

I did not see him after that – until today, fifty years later, when he stood in front of that old house – waiting. I saw us walking – his nose restored, wearing his hat, and still with me. I waited until we turned the corner and watched as I held onto him. I heard myself ask, “Mr. Childress. Is it time?”

He smiled and patted my left shoulder.

A Cell in Motion

Why am I here?

Alone each day for eleven years, I – an erudite man of immense education, considerable charm, and the unique ability to twist everything I touch into something illegal – rise, lean my forehead against the door, and stare at a wall six feet away.

The sound of metal beating against itself batters my ears minute upon minute with no moment of peace, nothing to look at other than what others have written on the walls. I step back, sit on a tattered exercise mat that doubles as a mattress strewn across the metal frame embedded into a concrete wall painted institutional green, look at the door, then close my eyes.

When my eyes open, the door has solidified, and, within moments, splits into fractals, divides, then explodes forming a cloud emerging from the center. Walls dissolve. Sink and shower bleed onto the floor, then coalesce into the ceiling.

The single overhead light casts shadows across the hallway floor. Parallel tubes expand – vertically, horizontally – from the solid plate where a key fits, when, once each day, a uniformed man delivers my food.

Thomas Elson’s short stories, poetry, and flash fiction have been published in numerous venues such as Calliope, The Cabinet of Heed, New Feathers, Pinyon, Lunaris, New Ulster, Lampeter, Selkie, and Adelaide. He divides his time between Northern California and Western Kansas. 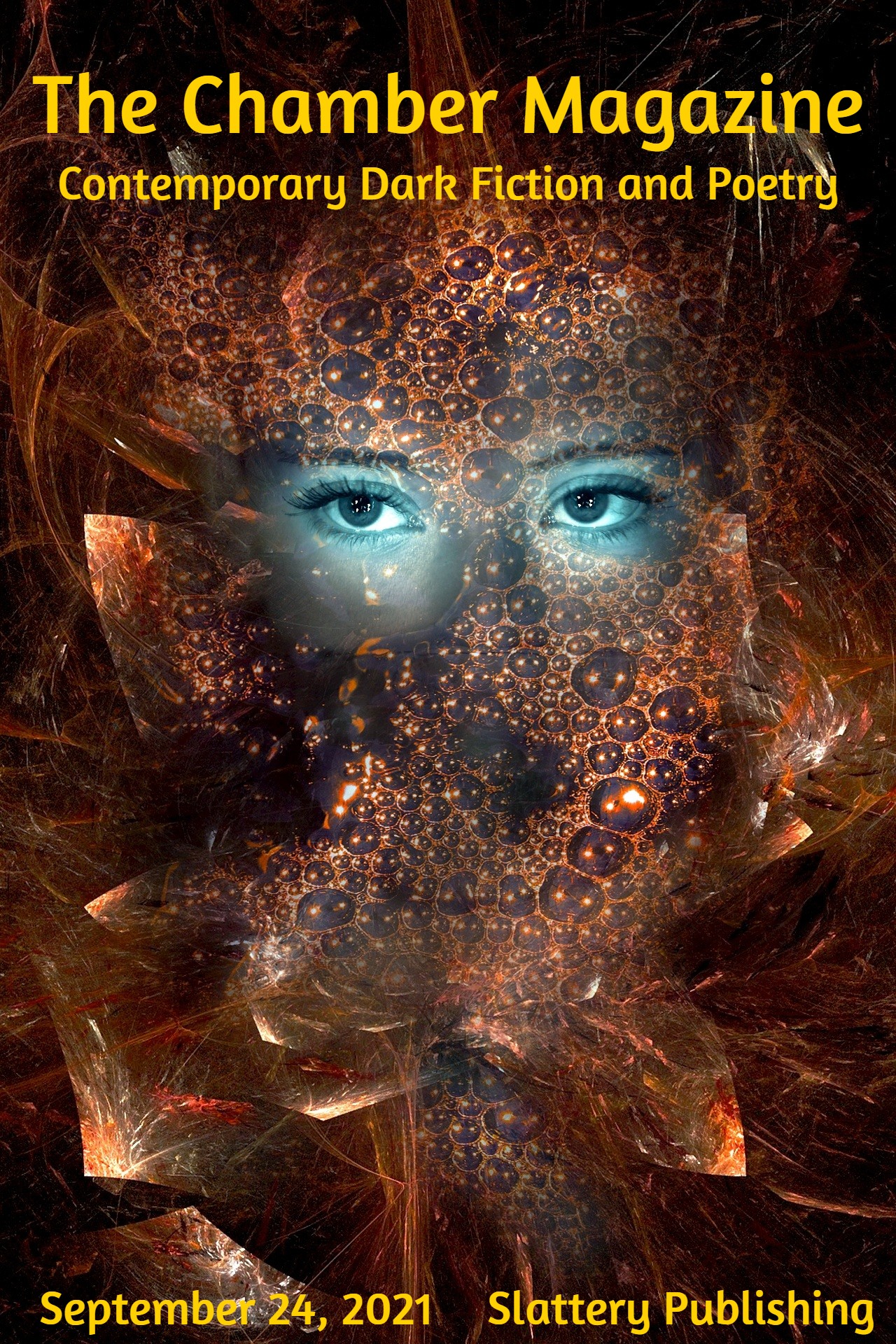